Abstract: President Barack Obama presented a gun control bill to congress barely a month after the dreadful assassination of 20 schoolchildren and teachers at Newtown, Connecticut.  “Our hearts are broken,” Obama said on the day of the shooting, as he vowed to take meaningful action.

Between 2006 and 2012 more than 60,000 people were killed in Mexico with guns purchased legally in the United States—more than 300 for every person killed at Newtown.  Often those assassinations have been accompanied by rape, torture, and the defilement of the bodies of the victims.  The people doing the killing, and some of those doing the dying, were either involved in producing and selling drugs for the US market, or were military personnel devoted to enforcing drug policies that have been actively promoted by the United States. And yet, public discussion of drug and gun policies in the United States have reflected practically no sense of accountability with regard to the effects that US “domestic” policy has on its closest neighbor. This lecture offers an analysis of this situation, and calls for an ethical grass-roots response.

Professor Lomnitz is the William H. Ransford Professor of Anthropology at Columbia University. Before going to Columbia U in 2006, Prof. Lomnitz was a professor of history at the University of Chicago.  He received his Ph.D. from Stanford University and his research focuses on the history, politics and culture of Latin America, particularly that of Mexico. His books include Death and the Idea of Mexico (Zone Books, 2005) and Deep Mexico, Silent Mexico: An Anthropology of Nationalism (University of Minnesota Press, 2001).

Between Two Cultures: An Interview with Helene Neu

Tune in as Helene Neu, former director of the elementary French program in RLL, talks about her time in RLL, why study abroad is more than just an opportunity to improve language skills, and what she has planned for the future.

Helene talks about her history with UM and RLL. LISTEN

Helene discusses how she helped transform the way French is taught in RLL in 1980's and 1990's. LISTEN

Studying abroad is much more than just improving language skills. Listen as Helene explains some of the reasons why. LISTEN

Helene talks about her plans for the future and why you'll still be able to see her on campus. LISTEN 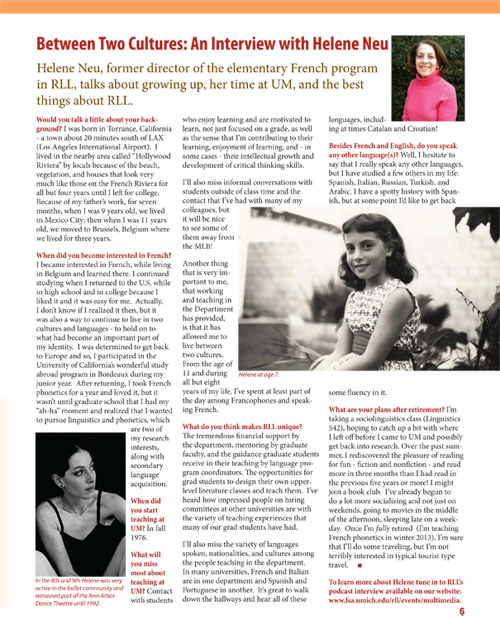 The “Spain and the Modern Arab World (1492-2012)” lecture series. This series will explore Spain’s diverse and sometimes contradictory relationship with the modern Arab world and with its own Islamic past.  The lectures will examine how modern Spanish and Arab writers, intellectuals, and musicians appropriate Spain’s Islamic past (al-Andalus) and put it to the service of different national and trans-national projects.  All lectures are free and open to the public.  All lectures are in English unless otherwise noted.

Lecture presented by Jonathan Glasser (College of William and Mary) on Oct 12, 2012

"Against the Idolatry of Economic Growth: Elements for a Cultural Critique of Environmental Destruction"

Prof Martin-Cabrera received his Ph.D. in Spanish from RLL 2005. Currently, he is an associate professor of Peninsular and Latin American Literatures and Culture at the UC San Diego. His research interests include Marxism, psychoanalysis, Trans-Atlantic Studies, Spanish film, critical pedagogy, and cultural theory. His book, Radical Justice: Spain and the Southern Cone Beyond Market and State (Lewisburg: Bucknell UP), is an analysis of dictatorial regimes on both sides of the Atlantic that uses detective fiction and political documentaries as a privileged terrain to interrogate the relationship between memory and justice in these regions.

The Rackham Centennial Alumni Lectures showcase the diversity and quality of the intellectual legacy of the University of Michigan graduates. Over 60 graduate programs hosted a centennial lecture delivered by graduate alumni in October 2012.

Watch Tati Calixto, RLL lecturer in Spanish, as she demonstrates Nahualá, or backstrap loom weaving technique, common in the Sololá, Huehuetenango, Sacatepéquez, Quetzaltenango and Quiché regions of the western highlands of Guatemala.

Tatiana Calixto is a Spanish Lecturer in the UM Department of Romance Langages and Literatures, LSA. This presentation was presented at North Quad's ongoing presenter series, "The Exposure Series", as part of the Faculty Night. Wednesday, October 17 2012. For more information about the Exposure series, visit: northquad.umich.edu/exposureseries/