The Unreal Reality of Alan Rudolph

The Unreal Reality of Alan Rudolph: Conversations with the Filmmaker & Collaborators

Quirky, off kilter, stylishly romantic and filled with moments of wry humor, Alan Rudolph makes movies with dreamy-eyed protagonists searching for love in all the wrong places. He often mashes up genres into something new and unique and peppers his films with elements not always beholden to realism. Rudolph began his four-decade career under the watchful eye of mentor Robert Altman, but he soon created a body of work that is clearly his own vision.

The Unreal Reality of Alan Rudolph: Conversations with the Filmmaker & Collaborators Symposium was held from Sunday, June 3 to Wednesday, June 5, 2018, and included panels of noted film scholars, critics, producers, and actors; screenings of a selection of Rudolph's films (as part of the Cinetopia Film Festival); an official opening of the Alan Rudolph Archive in the Special Collections Library; and a guest panel in the Spring Department of Film, Television, and Media class Women in Hollywood (FTVM 366).

Additionally, this symposium kicked off two exhibits: Still Images, Moving Pictures: The On-Set Photography of Joyce Rudolph in the Institute of the Humanities Gallery (June 1-7) and Nothing Makes Sense, Except Love: The Cinematic Musings of Director Alan Rudolph in the Hatcher Graduate Library Gallery (June 1 - August 19).

Sponsored by the Cinetopia International Film Festival, the U-M Library,
and the Department of Film, Television, and Media.

The Unreal Reality of Alan Rudolph
Welcome and Opening Remarks

Panel: A Knack for the Unexpected:
Why Alan Rudolph's Films Matter

On Monday, June 4, 2018, a panel of noted film scholars and critics discussed Alan Rudolph’s career and placed it in context of 1970s New Hollywood Cinema and 1980s-‘90s Indie Film Movement.

A Knack for the Unexpected: Why Alan Rudolph's Films Matter

Symposium attendees witness the official opening of the Alan Rudolph Archive, University of Michigan Library, Special Collections, and the opening of the exhibition Nothing Makes Sense, Except Love: The Cinematic Musings of Director Alan Rudolph in the Hatcher Graduate Library on Monday, June 4, 2018.

Nothing Makes Sense, Except Love:
The Cinematic Musings of Director Alan Rudolph

On Tuesday, June 5, 2018, an outstanding array of guests shared their experiences of working with Alan Rudolph and provided an insightful look at independent filmmaking.

An unsung art unto itself, still photography is an integral part of the motion picture-making process. Though an invisible presence on set, the still photographer frequently captures the most memorable images of a film, which often remain in the public consciousness long after it leaves theaters.

During her three-decade-long career as a still photographer, Joyce Rudolph has immortalized some of the most iconic movie characters and stars in American popular culture. Featured on magazine covers, movie one sheets, and newspaper advertisements, her distinct images reach beyond technical proficiency to capture intimate, artful portraits of their subjects.

This exhibit (curated by FTVM Alumna Katherine Sherry '18) showcases 32 photographs from the newly opened Alan and Joyce Rudolph Archive, a part of the Screen Arts Mavericks & Makers Collection at the University of Michigan. It is organized into five sections: Caught in the Act, Intimate Portraits, Picture in Picture, In Profile, and Unconventional Couples.

Enjoying the Opening of the Joyce Rudolph Exhibit

All films in conjunction with this symposium were screened at the Michigan Theater (as a part of the Cinetopia International Film Festival).

(Below, from left to right ) Producer Ira Deutchman (Panel/QA Moderator), Director Alan Rudolph, Actor John Hawkinson, Actress ​Sondra Locke, and Producer Steven Wolfe address questions from the audience in a Question and Answer Session held after the Midwest Premiere of Ray Meets Helen at the Michigan Theater on Sunday, June 3, 2018. 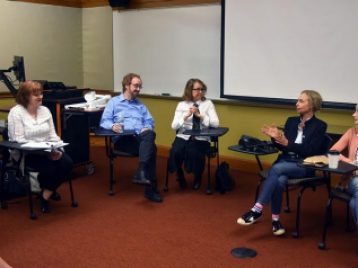 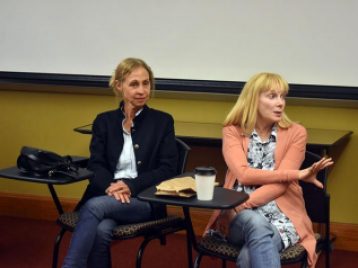