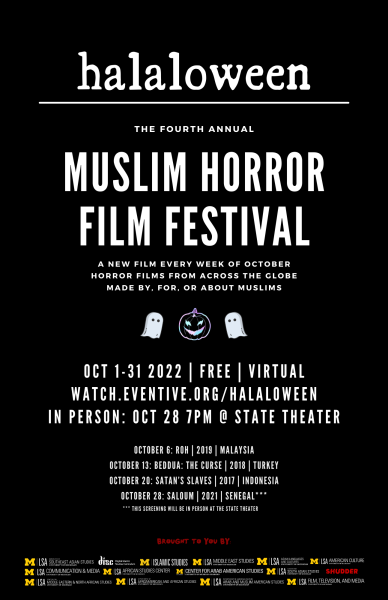 What's Halaloween? Halaloween screens horror films from across the globe that were made by, for, or about Muslims with the hopes of understanding “What scares Muslim audiences? Are horror movies halal?”

This year’s 2022 festival will be both in person and online, screening one film a week during the month of October, and ending with an in-person screening at the State Theater, Friday, October 28, 2022, at 7:00 PM. Each online screening will be available to watch for a week, all screenings are free.

We'll wrap up the month of October with a live panel discussion on Muslim Horror, the use of Islam and the Quran, and how each region differs in its creation of horror films. Stay tuned for the 2022 lineup of films and an announcement on the Muslim Horror Panel discussion!
More info: watch.eventive.org/halaloween
__________________
THIS WEEK’S FEATURE
From Oct 20th to the 27th, stream the Indonesian horror film Satan’s Slaves on demand at http://watch.eventive.org/halaloween. Pre-order the film anytime, and check out the rest of the months Halaloween Horror selection!

Satan's Slaves (Indonesian: Pengabdi Setan) is a 2017 Indonesian gothic horror film written and directed by Joko Anwar. The film follows a poor family who is haunted by their mother who recently died after suffering from a debilitating illness.
__________________


Love Horror Films? Shudder streams the best in new independent and international horror. Try Shudder free for 14 days with promo code HALALOWEEN2022 when you sign up at Shudder.com.

Want to hear about similar events from U-M Islamic Studies? Sign up for the GISC Newsletter ( https://myumi.ch/nbW83)! We send out a monthly newsletter in collaboration with the Center for Middle Eastern and North African Studies, and the Digital Islamic Studies Curriculum.

Stay updated on our upcoming events by following our socials here: