"In Pursuit of Wholesome TV:The Strange Path to the Television Code" 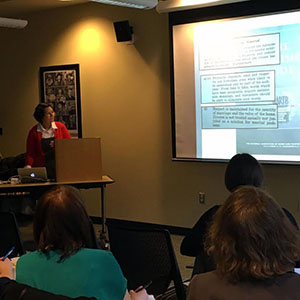 Jaramillo's current book project traces the history of the 1952 Television Code. The Television Code is a document full of the anxieties and consensus politics of the 1950s, the appeasements of a terrified commercial industry, and the standardization of quotidian business deals. The original TV Code, crafted by the National Association of Radio and Television Broadcasters and implemented in March 1952, underwent twenty-one revisions until the entire enterprise collapsed in 1983. Perhaps because the Code regulated both program content and stations’ dealings with advertisers it is not understood to be as controversial or dramatic as the Hollywood Production Code. And perhaps because multiple Radio Codes preceded the 1952 Code, scholars consider it to be more of the same—an inevitable step toward industrial maturity. The journey to the TV Code is simultaneously surprising, funny, maddening, and devastating. By tracing that journey this presentation will explore the relationships and power struggles that bound national and local interests—both private and public—to the policing of television content.

This interdisciplinary roundtable discussion focused on strategies and issues related to teaching race and media. The purpose of this event was to create a conversation about teaching in this area, while sharing expertise and experience that would be useful to faculty and graduate students alike. Participants Robin R. Means Coleman (Professor, Afroamerican and African Studies and Communications), Yeidy Rivero (Professor, Department of Film, Television, and Media), and Colin Gunckel (Assistant Professor, American Culture and Department of Film, Television, and Media) had a wide-ranging discussion about a number of topics including syllabus design, classroom dynamics, assignment strategies, and the teaching of potentially controversial subjects. This event was made possible by the Diversity in Media Project, organized by Colin Gunckel and Candace Moore, the Center for Research on Learning and Teaching Faculty Development Fund, and the Department of Film, Television, and Media.

Do audiences watch makeover reality shows to laugh and point at ordinary people on screen, or do they use them for their own self-improvement? Drawing on a large research study with 1,800 survey responses and 130 interviews, Sender found that audiences are highly reflexive about reality shows in three ways. They use the shows to be self-reflexive in terms of their appearance according to social norms; they are very savvy about the production and consumption of makeover television; and they explicitly constructed their responses to the shows within their understanding of what a research environment demands. In this talk, Sender illustrates these three types of reflexivity through audiences’ discussions of surveillance and shame in makeover television shows. 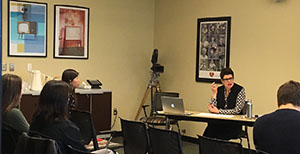 Dimitri Pavlounis talked about William J. Burns and the detective dictograph. In his presentation, Pavlounis put this imagined, mediated life of the dictograph in conversation with its material affordances and limitations. Moreover, he argued that Burns’ status as “America’s Sherlock Holmes” helped transform the dictograph from a machine that one journalist described as a “merely highly refined telephone” into an infallible forensic technology capable of recording indexical traces of criminal bodies. 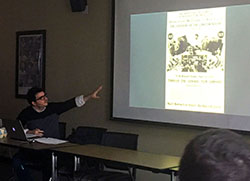 In this working talk, Josh outlined the larger theoretical framework of his dissertation, “Excess Labour, Excessive Consumption: A Theory of Loving Media, Useless Use Value, and Queer Cultural Capital.” Each chapter of his dissertation reframes a media genre or aesthetic style as a form of queer labour and rethinks key terms in materialist theories of value. Josh focused on chapter three of his dissertation, on camp as labour, and how queers and transfolk consume “bad” media as a way to communally ameliorate the affective traumas of living under capitalism, especially in Israel Luna’s controversial film Ticked-Off Trannies with Knives (2010). He finished with a tentative discussion of the links between exploitation and queer consumptive labour. 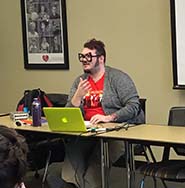 This presentation considers Barthes one hundred years after his birth, seeking to illuminate the distinct forms of affect that form not only the mood of his writing, but also its mode. What sort of subject does Barthes project in his empires of signs? Who or what forms the subject of his semiotics?

FTVM graduate students engage in a workshop with USC Professor Akira Lippit in the FTVM conference room on Friday, January 22, from 11 a.m.-1 p.m.

Of all the criticisms of André Bazin’s defense of cinematic realism, one the most damning had been the claim that he did not account for its role in normalizing ideological and political interests. This talk seeks to demonstrate that, on the contrary, he asserted a deep connection between the emergence of the medium and the political pressures of the age. What emerges through close readings of his essays on Stalinist cinema, the newsreel, Italian neo-realism, as well as the original version of the “The myth of total cinema,” is a Bazinian account of cinematic realism’s ideological complicity with its age. It is only against this background of critique that we can start to restore the alternate political role with which Bazin invests his realist aesthetic.

FTVM Speaker Series Presents a Talk by FTVM Doctoral Candidate Katy Peplin: “Does Anybody Like Dolphins?: Realism, Nature Documentary and the Image” on November 5, 2015, at 11:30 a.m. in the FTVM Conference Room (6360 North Quad).

“Does Anybody Like Dolphins?: Realism, Nature Documentary and the Image” begins with a discussion of Bazin, film critic and theorist who established a special place for animal subjects in his discourses on realism, and the world of scholarship that has followed his original work. It then applies those concepts to the realm of the nature documentary, and traces how changes in technology have caused that genre to adjust what is meant by realism in regards to the natural environment. This leads into the discussion of the medium of blu-ray discs, and how those discs were often marketed in terms of their hyperrealism, show-cased by otherworldly images of the natural world. This combination of hypereality and realism placed an incredible burden on the body of the animal to be imagistic, and brilliant in HD, and lead, perhaps in part, to the rise of the digital animal body.

In this paper, Strassfeld tells the story of the efforts of the Detroit neighborhood of Redford to shutter an adult business that had opened in its midst in the summer of 1972. Not long after the Adult World Bookstore set up shop in Redford, neighborhood residents mounted a campaign aimed at stamping out the adult businesses, inundating the offices of the mayor and city councilmen with hundreds of letters calling for the city to take action. Strassfeld’s paper aims to situate local antiporn activism within the context of the urban crisis of the early 1970s, as Detroit and cities across the country struggled to cope with the effects of white flight, deindustrialization, and racial conflict. Utilizing archival sources, including the handwritten letters sent by residents to city officials, he argues that Redford's antiporn activists drew much of their rhetoric and tactics from white racial politics of the day.