On Friday, April 14, 2017, Academy Award-nominated Screenwriter and Director Peter Hedges visited Director of Screenwriting's Jim Burnstein's FTVM 427 (Screenwriting III) to conduct a screenwriting workshop. Hedges also visited Burnstein and Rayher's FTVM 423 (Practicum for the Screenwriter/Dramatic Narrative III), viewed students' rough cuts, and offered feedback and suggestions for how to further edit and tighten their films before they are submitted to the Traverse City Film Festival in July. Burnstein commented, "[Peter] made it clear to the class how impressed he was with both of these films and heaped praise individually and collectively on the students who made them. The students could not have been happier!​"

On Monday, March 6, 2017, Ira Deutchman visited Dan Herbert's FTVM 620 graduate seminar on "Analyzing Media Industries": this seminar is doing the archival work that will help to produce the library exhibit in Hatcher that will accompany the Ira Deutchman symposium in June of this year.

In FTVM 620, Deutchman talked about his career in general and the world of independent cinema.  He then visited Herbert's FTVM 325 "New Line and New Hollywood Cinema" class, where he spoke about his time running Fine Line Features and indie cinema of the 1990s more generally.

Creator and showrunner of Grimm, Jim Kouf (pictured at right) and producer of Grimm, Lynn Kouf (pictured at left) visited Director of Screenwriting Jim Burnstein's FTVM 427 and 423 classes last Friday, February 17, 2017, to critique student work and offer their professional advice. In the morning, the Koufs met with FTVM 427, wherein they read the first five pages of student scripts as a group, and then offered their critiques. In the afternoon, they met with FTVM 423 and participated in a table reading of the two 423 productions Malignant Humor (written by Kelsey Fox and directed by Nick Sheehan) and Chasing the Goat (written by George Gardner and directed by Celeste Holden).

On February 14, 2017, legendary director Adachi Masao video conferenced into Markus Nornes' Japanese Cinema course.  Adachi is known both for his pink films and his experimental films, as well as his scenarios for Oshima Nagisa and Wakamatsu Koji. Students asked him about his films and film theory, in addition to his 25 year stint in Lebanon with the Red Army and PFLP. 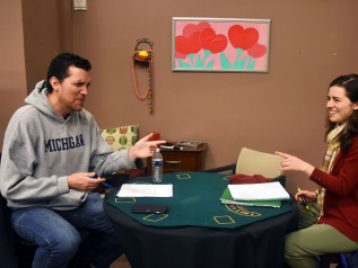 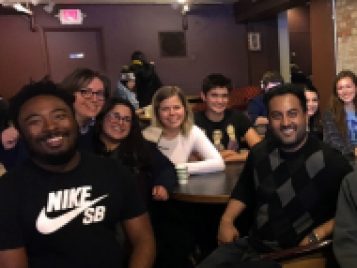 On Friday, January 20, 2017, Director Ryusuke Hamaguchi visited UM and conducted a question and answer session (moderated by Professor Markus Nornes) after the screening of his film Happy Hour in Angell Hall, Auditorium A. Billed as "one of the most important Japanese films of 2015," the film traces four thirty-something female friends in the misty seaside city of Kobe as they navigate the unsteady currents of their work, domestic, and romantic lives.

Animator David Knott visited UM from November 15-17, 2016, to share his experiences and knowledge of the field of television animation with several FTVM classes: FTVM 236, FTVM 306, and FTVM 311. In Cohen's FTVM 236, The Art of Film, Knott gave a mini-lecture on storyboarding and animation. While in McNamara's FTVM 306, New Media Practices, Knott discussed his own career trajectory and described the current field of animation. In Thornton's FTVM 311, Writing for Television: The Spec Script, Knott discussed the process of working his way up through animation after graduating from Michigan. He also participated in three "table reads" of specs currently in development in the class, including one of the two animated shows the class is covering, "Bob's Burgers."

Finally, Knott led a master class in story conceptualization and visual development for students from FTVM and Stamps School of Art & Design, who then worked individually to create thumbnails and rough boards for a short script that Knott wrote. Once completed, Knott conducted individual critiques with each student.

Producer Peter Jaysen visited several FTVM classes in early November.  On Wednesday, November 9, 2016, he visited FTVM 427, Screenwriting III (Burnstein/Benedek); during his visit, he read the first ten pages of students' screenplays and provided constructive feedback. He then visited FTVM 311, Writing for Television: The Spec Script (Thornton) on Thursday, November 10, wherein he read portions of students' spec scripts and shared his comments. Jaysen followed his visit to 311 with a visit to FTVM 404, TV Pilots (Rayher/Thornton) on Thursday night, again offering his professional commentary.

Finally, on Friday, November 11, Jaysen listened to FTVM 411, Writing for Television II, Pilots (Thornton) students Katrina Anderson, Alexandria Schunot, and Antonio Whitfield pitch their ideas, offering advice on "how to strengthen a pitch" in front of an audience composed of a potpourri of students he had met during the week.

Colleton is best known for her work on the hit series Dexter. The series has been nominated for a remarkable 77 awards, while Colleton has received three PGA and Emmy nominations as the Executive Producer of the series.

Gary Gilbert visited UM on October 21, 2016, wherein he conducted an open discussion on the film and TV industry in MLB, Auditorium 2.  Gilbert is an Academy Award nominated producer and the founder and president of Gilbert Films, a feature film and television production company based in Los Angeles. Over the past twelve years, he has produced over a dozen feature films, including the 2004 critically acclaimed Garden State, starring Zach Braff and Natalie Portman. In 2005, Gilbert, along with Braff, won an Independent Spirit Award for Best First Feature Film.

In 2010, Gilbert produced The Kids Are All Right, which, after premièring at the Sundance Film Festival, was immediately acquired by Focus Features (Universal Studios).The film was critically acclaimed, won two Golden Globes in 2011, and received four Academy Award nominations.

As a part of the Jonathan Glickman Prodcucers Series, Kent Alterman, President of Comedy Central, visited UM on September 30, 2016. Initially, he visited Jim Burnstein and Tom Benedek's FTVM 427 (Screenwriting III) class and conducted a workshop, offering analysis of the opening pages of each student's script.  Later in the afternoon, Alterman interviewed with WOLV TV and conducted an open discussion in Angell Hall, Auditorium B.

Alterman is responsible for the leadership, strategy and management of the #1 brand in comedy and oversees the development and production of all original content produced by Comedy Central.  Alterman rejoined Comedy Central in 2010 as head of original programming and production after a previous stint at the network as head of east coast development from 1996-2000. He was promoted to president, original programming in 2013 and rose to his current position of president in 2016.

During his visit to Sarris's FTVM 403, Sketch Comedy class on Friday, September 23, 2016, Cendrowski gave tips on writing and directing comedy and the class then table-read students' scripts.  Two sketches, "Devil's Advocate" and "Names Names Names", written by Kelsey Fox and Aline Mayagoitia respectively, were then workshopped in the studio, with Cendrowski offering suggestions for both blocking and performance.