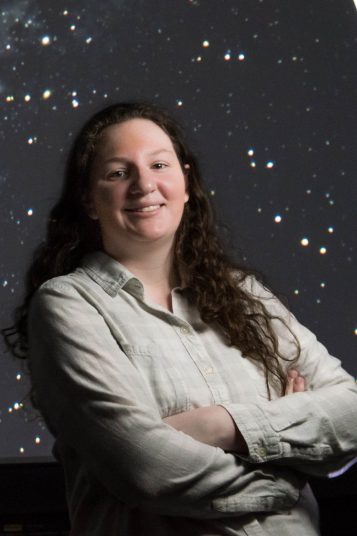 PhD Research: During her time at the University of Michigan, Traci Johnson modeled strong gravitational lensing in galaxy clusters, the most massive structures in the universe and natural telescopes to the distant universe. The dark matter halos occupied by these clusters are massive enough to bend and deflect light from the background toward our line-of-sight, allowing us to see highly magnified, distorted, multiple images of the same background galaxies. Johnson uses the configurations of these lensed images to model the cluster mass. These models are used to derive the magnification of the source and to reconstruct the shape of the galaxy as it would be seen if not lensed. All of this information is needed to study the physical properties of the lensed galaxies, such as luminosity, morphology, substructure, and star formation rate. Strong lensing allows us to gain detailed insight into the star formation history of the universe around the time when galaxies were producing their stars most efficiently.

Exciting Discovery: Along with her advisor and collaborators, Johnson used strong gravitational lensing to zoom in on the star formation and morphology of a highly magnified galaxy behind a galaxy cluster. They were able to resolve individual star forming regions in this galaxy as it was 11 billion years ago on physical scales five-to-ten times better than the Hubble SpaceTelescope can do without lensing.

Strong Support: “There’s great support here. I’ve had the opportunity to attend conferences around the world. I’ve never had any issues with finding funding.”