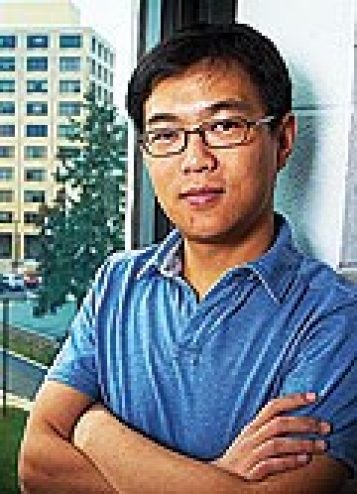 Ming Zhao worked with his advisor to push the limits of interferometry to get the first near-IR images of rapidly rotating stars and very close binaries. His work made use of the Michigan Infrared Combiner (MIRC) developed by Monnier for the CHARA long-baseline interferometer array. By using MIRC and aperture synthesis imaging, Zhao was the first to resolve the well-known binary Beta Lyrae. The images were detailed enough to show the primary star interacting with the disk of the secondary. Zhao was also among the first to image main-sequence stars other than the Sun — the rapid-rotators Altair, Alderamin, and Rasalhague. He and Monnier revealed not only the stars’ oblate shapes but also their uneven surface brightness. Zhao segued into exoplanets by studying the hot Jupiter Upsilon Andromedae b, where he obtained the best upper limits of the planet/star contrast ratios in the H band to date.

Instrumentation Expertise: “One of the reasons I came to U-M is because it has top experts in interferometry. My advisor gave me lots of training on telescopes and interferometric techniques. This is critical because at CHARA, you’re in charge and have to solve all your own problems. It also gave me the skills and confidence as a brand-new postdoc to approach technicians at Palomar with an algorithm I developed to stabilize the telescope’s tracking. We improved the guiding precision by a factor of ~10 and made three detections of planetary atmospheres shortly thereafter. This was all thanks to the training I got at Michigan."