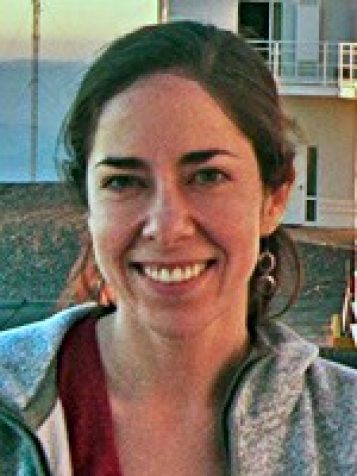 Anne Jaskot worked with her advisor to examine two important questions about the role of neutral hydrogen gas in starburst galaxies. First, what happens to it during a starburst? And second, does this gas prevent ionizing radiation from escaping these galaxies? Determining how much high-energy radiation escapes galaxies is important to understanding the reionization of the early universe.

In terms of the former, Jaskot used optical and radio data for a uniform sample of more than 500 galaxies to show that competing processes conspire to keep the neutral atomic hydrogen supply approximately constant during a starburst. Although starburst galaxies do not appear to have significantly more atomic hydrogen than other galaxies, they use their gas supply more efficiently to fuel star formation. Galaxy mergers may be causing this enhanced efficiency.

For the latter question, Jaskot analyzed UV spectra from Hubble and optical spectra from Magellan and the Sloan Digital Sky Survey for the Green Pea galaxies, nearby compact starbursting galaxies similar to those in the early universe. The results suggest that these galaxies are indeed capable of leaking ionizing radiation. In fact, Jaskot and Oey believe the spectral signatures they observed may provide a template for identifying galaxies in the more distant universe from which ionizing radiation has escaped. In addition, by modeling optical spectral data, they showed that recent supernova explosions may have occurred. These explosions may have cleared out gaps in the neutral hydrogen, allowing the ionizing radiation to escape.

Preparation: "The U-M Astronomy Department trained me in all aspects of what it means to be an independent scientist. I learned to come up with and investigate my own research questions, and received practice and feedback on proposal writing, research, scientific writing, presenting – even communicating with non-scientists. In addition, I had the opportunity to plan and teach an undergraduate class, which has been immensely helpful for my current work."