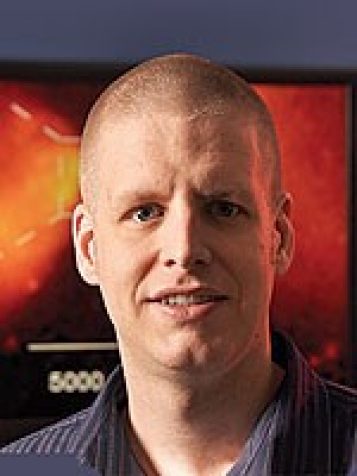 John Tobin studied the shape and motion of gas clouds around protostars. Tobin’s findings challenged conventional thinking that young stars’ clouds were spherical and well-ordered. Instead, using infrared shadow images from Spitzer, he showed that these clouds were not spherical but “filamentary,” or loosely cylindrical. In addition, radio observations of dense gas tracing molecules showed that the velocity profiles of the clouds were governed not by rotation but by the inward motion of gas toward the protostar. He showed that rotation only becomes significant much closer to the star than previously thought, where it causes the cloud’s in-falling gas and dust to form an orbiting disk. His insights are helping to transform understanding of the earliest phases of star formation.

Preparation: “U-M prepared me for the future because I was trained in so many observational methods — optical spectroscopy, infrared, single-dish radio, and radio interferometry. Interferometry is going to become even more important as ALMA gives us a view of the radio sky that’s as good as Hubble gets for optical images. I know I’m prepared to take advantage of these next-generation facilities.”