LSA 101: Info for Admitted Students
Learn what it means to be a Wolverine and dig in to what the liberal arts are all about. View our presentations and information from wherever you are.
Outcomes and Possibilities
LSA delivers a purposeful, pragmatic liberal arts education that employers respect and seek out.
Meet the Moment
Discover how LSA is meeting the moment by tackling the world’s most daunting problems, reinvigorating liberal arts education and research, and making it more equitable and relevant than ever.
Staff Achievement Awards Program
This is an annual opportunity to acknowledge and celebrate exceptional staff contributions to the success of the College . Information regarding eligibility, nomination, selection, notification, and winners can be found here.

The LSA Honors Program allows students to apply their energy toward community-engaged projects instead of academic theses. Some students have used the program to provide greater access to people with disabilities.
by Julie Halpert

When Vincent Pinti (A.B. ’22) was accepted to the University of Michigan in 2019, he was thrilled. It had one of the top political science programs, the field he wanted to pursue. And he was impressed by another ranking: one that declared U-M the best school in the country for students with disabilities.

Pinti has spinal muscular atrophy and has been in a wheelchair all his life. When he arrived on campus, that lived experience helped him identify numerous ways the university could improve the experiences of disabled people. “It was really challenging to get the services that I needed to be able to support myself and to be able to literally get out of bed in the morning,” he says.

Pinti spent much of his time on campus working to ensure future students with disabilities wouldn’t face the same obstacles. “I want the University of Michigan to be a place that is truly for everybody,” he says. “I want more people who look like me to choose U-M because it celebrates their diversity, helps develop their potential, and makes U-M a better place.”

To help make this happen, Pinti began developing a database for personal care assistants that could help people with chronic illness or disabilities in the U-M community meet their daily mental and physical needs. “It’s hard, manual work,” Pinti explains, “and people don’t get compensated very much at all from the state.”

In collaboration with Central Student Government (CSG), Pinti established two $1,500 scholarships to provide funding for students who want to work in this field. This work helped Pinti win the James T. Neubacher Award, an annual University of Michigan award given to a student, faculty member, staff, or alum whose efforts have significantly improved the condition and available experiences for students on campus.

He investigated 79 schools across the Midwest and Mid-Atlantic, yielding a comprehensive environmental accessibility score based on a variety of factors, including the health care providers and services that a school offers. The big motivator for his activism is “to make sure that University of Michigan is a place for truly everybody and that more people who look like me choose the institution as a place to go and celebrate their diversity and their potential and make this university a better place.”

Last October, Pinti began working on a Personal Care Assistant Database. The database, which he is hoping will roll out by the fall, would match pre-health students interested in becoming personal care assistants with people who have disabilities. In addition to the two scholarships he helped to establish, Pinti also held trainings for student leaders in CSG and other groups about universal design and disability justice.

“If we talk about our experiences and we talk about what can work for all of us, it will make universities across the country much better,” he says. 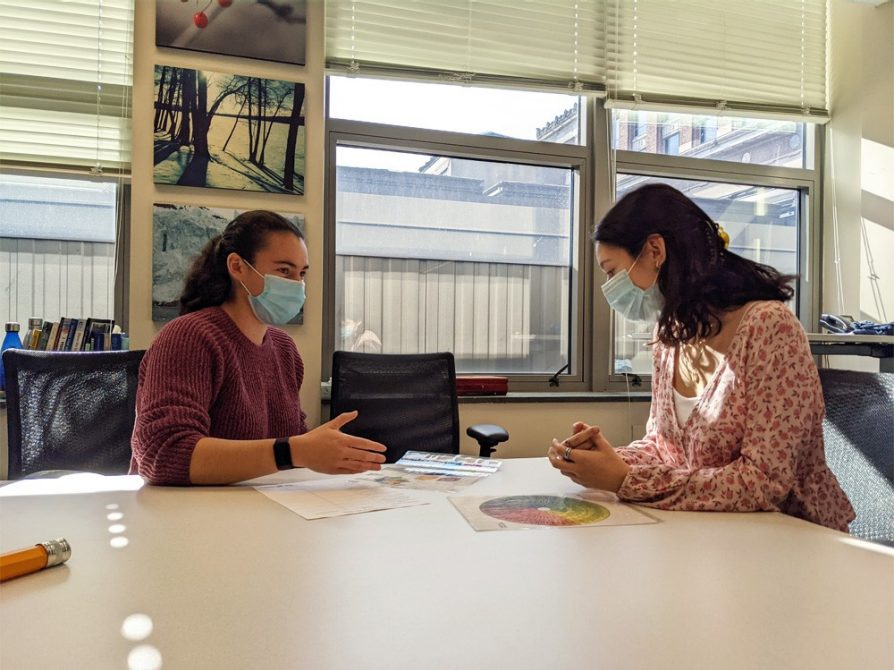 Sarah Renberg (B.S. ’22), a graduate of the Honors Program at LSA, works as the first Honors Wellness Coach as part of a collaboration between LSA Honors and Wolverine Wellness.
Grayson Buning (B.S. ’22) assists at an adaptive sports tournament. Buning became interested in the disability field after tagging along with a roommate who attended wheelchair tennis practice.
Michael Wilson, an LSA honors student, got a window into the world of a student living with a disability after a trampoline accident in July 2021 caused him to tear ligaments in his knee.
Previous Slide Next Slide

Pinti was not the only LSA honors student to make disability advocacy a priority, thanks in large part to Honors in Engaged Liberal Arts (HELA), a program facilitated by the LSA Honors Program that allows honors students to design a community-engaged project instead of writing an academic thesis. HELA is the brainchild of Mika LaVaque-Manty, the director of the Honors Program, whose own work includes disability politics. Writing a thesis can be a valuable experience, LaVaque-Manty says, but “students also want to change the world.” He wanted to find a way to accommodate those who sought to engage in meaningful projects that could solve problems, enhance civic assets, or catalyze meaningful change. “Education is not just about doing research,” he says. “It's about learning how to teach yourself to do various kinds of things. That’s the hallmark of an honors education.”

Sarah Renberg (B.S. ’22), a graduate of the Honors Program who majored in biopsychology, cognition, and neuroscience, produced a podcast called “How to Student” as her HELA project. An elite hockey player, Renberg sustained a brain injury that required rehabilitation before she started college. The HELA program offered a more appealing alternative to a scientific paper that, she worried, “no one would ever read.” LaVaque-Manty encouraged her to embrace her differences as a positive differentiating factor instead of a cause for embarrassment. Renberg applied the same ethos to her podcast, which showcased the stories of people from a variety of backgrounds “so that everyone could listen to someone like them.” In each of the 14 episodes, Renberg interviewed a student or an expert and offered listeners a list of specific actions they could take. One episode, for example, featured discussions about well-being at a time when many students were struggling with mental health as a way to both draw attention to the issues students are facing and to equip them with tools to improve them. “How to Student” was downloaded over 2,300 times. HELA, says Renberg, gives students like her a path “to create the changes you want to see in the world.”

Grayson Buning (B.S. ’22), who majored in biopsychology, cognition, and neuroscience, explored the Honors Program in the spring of his junior year. He was looking for a way to extend his work with adaptive sports—competitive and recreational sports that have been adapted for people with disabilities. He’d written extensively about adaptive sports in The Michigan Daily and he hoped his stories would raise more interest and awareness. Buning became attracted to the disability field after tagging along with his roommate who attended wheelchair tennis practice. This exposure to adaptive athletics led to awareness of the many different people who have different kinds of disabilities. “I didn’t feel like I could just stand idly by while all those problems still exist,” he says. “I just want to try my best to do my part.”

Buning’s determination led to his HELA project, “We’re Not Going Away: Improving Disability Access to Sports and Fitness at the University of Michigan.” The project aspires to improve access to adaptive sports and fitness. It has provided him a way to pursue his studies while also giving him an opportunity to “pursue the things I'm passionate about.”

As a first-year honors student, Michael Wilson got a window into the world of a student living with a disability after a trampoline accident in July 2021 caused him to tear ligaments in his knee. He arrived on campus having to alternate between crutches and a wheelchair. “It’s hard to navigate the dining hall. It's hard to navigate getting to class. It’s hard to navigate the classrooms once you're inside,” he says. It was challenging to enter the social scene in what was a critical time as a new undergraduate. “It took a serious injury and a very difficult time here at the University of Michigan to recognize that there's a problem and to become excited to work on finding a solution,” he says. He’s not yet certain if he’ll be writing a thesis or participating in HELA. He’s hoping to learn from both Renberg and Pinti and continue their work once they graduate. Wilson doesn’t pretend to be in the same situation as someone with a permanent disability, but his goal is to aid in making the experience of those with disabilities “as similar and as representative as every other student who doesn't have a physical or mental limitation.”

LaVaque-Manty says these projects hold the potential to have far wider impacts than an individual thesis, pointing to Renberg’s popular podcast and Buning’s work “that is changing the disability landscape at the University of Michigan.” Citing a statistic that 47 percent of students reported anxiety or depression during the pandemic, he says that the struggles that disabled students face “are extreme versions of the challenges that all of our students have.” He believes that in shining a light on these issues and the student-led initiatives to address them “will help to make the University of Michigan more inclusive for everybody.”

_______________
Help LSA Meet the Moment: The liberal arts and sciences have always provided a foundation for a meaningful life and successful career, and for expanding our understanding of the human condition and the natural world. Today, LSA is meeting this moment of global change, crisis, and uncertainty by tackling the world’s wickedest problems, reinvigorating liberal arts education and research, making it more equitable and relevant than ever. Visit the Meet the Moment page to learn how you can help.