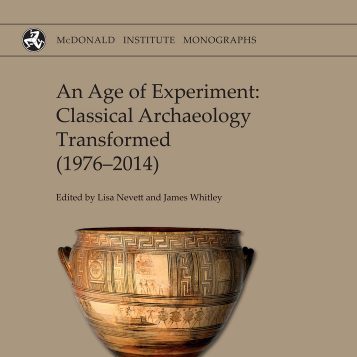 What is Classical Archaeology’s place within the overall study of antiquity and the history of humanity? And what is its relationship to its kindred disciplines of ancient history, art history and Mediterranean prehistory? Forty or so years ago Classical Archaeology appeared to be a very conservative and rather niche area of scholarly endeavour.

Then both prehistorians and ancient historians might have answered that Classical Archaeology had little to offer their respective fields of study. Since the late 1970s, however, the subject has been transformed, a transformation in which the example of Anthony Snodgrass has played a significant role. This volume brings together the work of Snodgrass’s former students; scholars who, while they could be variously classified as prehistorians, ancient historians, Classical archaeologists, Classical art historians, Classicists and modern historians, are internationally recognised scholars in their respective fields. Each contribution brings a unique perspective to bear on the current state of Classical archaeology and its place in not only Mediterranean but global history, art history and archaeology.