Vaults of Heaven: Visions of Byzantium 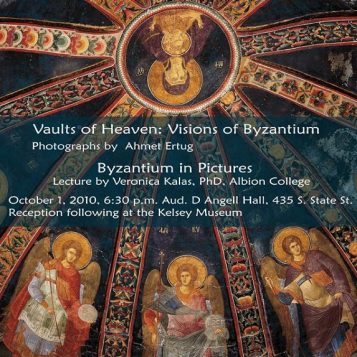 This exhibition presented a series of ultra-large-scale photographs, many over six feet tall, by the renowned Turkish photographer Ahmet Ertug. Focusing on paintings, mosaics, and architecture of the Byzantine world (sixth-fourteenth centuries AD), the photos provided a journey through such venerated sites as Istanbul's Hagia Sophia and Church of Christ of Chora, as well as churches in the Cappadocia region of central Turkey, an area known for hidden Christian retreats hewn out of the region’s unusual volcanic rock formations. Accompanying the photographs were objects from the Kelsey’s collections of Byzantine and Islamic material, including gold coins, manuscript pages (on loan from the University of Michigan Museum of Art), small carvings, pottery, and wooden architectural fragments.