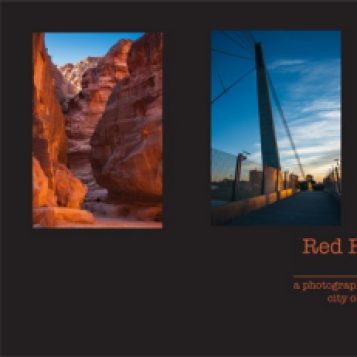 This exhibition of photographs by Susan Webb revealed the connections between two great cities that do not readily suggest comparison: the modern city of Detroit, Michigan, and the ancient site of Petra in modern Jordan. In the early twentieth century Detroit became a powerhouse of industry, manufacturing, and innovation with wide boulevards and stunning architecture known as “the Paris of the West.” In the last two generations, however, the city endured a precipitous decline. In the remains of a once grand and beautiful urban landscape are buildings that evoke a glorious past. To dedicated Detroiters, those buildings offer hope that this metropolis will rise again. Petra, about 50 miles south of the Dead Sea, was the capital city for  a nomadic tribe, the Nabataeans, more than 2,000 years ago. In antiquity it was the hub of spice and silk routes that connected the Far East with the Mediterranean. Nabataeans lived on a grand scale, carving theaters, temples, and tombs out of the red sandstone cliffs, adorning their surroundings with fountains and gardens. Today, the area around Petra is home to resilient Bedouin tribes and a world-famous archaeological site. These photographs illuminated two cities that lie in the shadow of history. Every shot provided the viewer with a double vision: the present moment embedded in the past, and the shadow of the past inherent in the present.