Life in Miniature: Identity and Display at Ancient Seleucia-on-the-Tigris 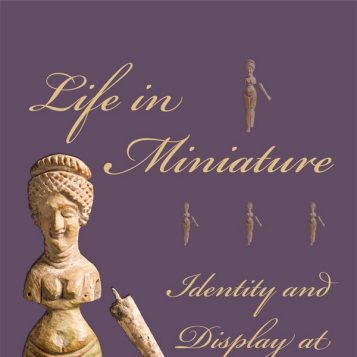 Why have so many people throughout history created miniature objects, and what do they mean? How do the miniatures made by a particular society reflect the identities and values of its populace? "Life in Miniature" investigated these questions using miniature objects from the ancient Seleucid capital. The blend of cultures at Seleucia fostered the hybrid styles and manufacturing techniques of the miniature objects in this installation. Visitors to the exhibition interacted with these miniatures through a series of nine digital animations, accessible on iPads in the gallery. In these animations, digital reconstructions of several exhibited objects  moved in the same way(s) that they did for their original owners approximately 2,000 years ago.  A display of modern-day miniatures, such as dolls and collectibles, bridged the gap between past and present. A photographic collage juxtaposed images of people holding their own contemporary miniatures (things like Christmas ornaments, refrigerator magnets, wedding-cake toppers) with photos of Kelsey staffers holding the ancient artifacts.