The Joy of Recognition: Selected Essays of Omry Ronen 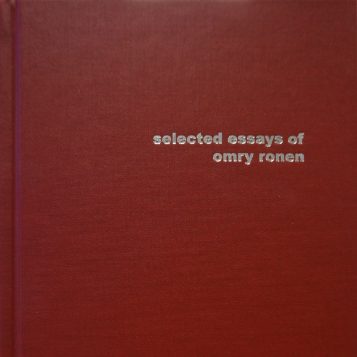 On November 1–2, 2013, the Department of Slavic Languages and Literatures organized a conference in memory of Omry Ronen (born July 12, 1937, Odessa, died November 1, 2012, Ann Arbor). The conference included papers given by his former students as well as an evening of recollections. During the conference many participants expressed their regret that Omry’s English-language essays were published in journals that are not easily accessible. Barry Scherr and I suggested that we put together a volume of this work, and Herbert Eagle and Jindrich Toman expressed their willingness to publish it as part of Michigan Slavic Publications. That volume is now complete.

In addition to twenty essays written in English, it includes Barry’s keynote address at the conference (“Omry Ronen’s Critical Legacy”), an interview with Omry translated from Russian, and Omry’s complete bibliography. Thanks to the enthusiastic participation of his former students—Karen Evans-Romaine, Sara Feldman, Susanne Fusso, Julie Hansen, Olga Peters Hasty, Yvonne Howell, Mariya Lomakina, Nancy Pollak, Karen Rosenflanz, and Timothy D. Sergay—we were also able to offer translations of selected essays from his Russian language scholarship. The book, entitled The Joy of Recognition: Selected Essays of Omry Ronen, is about 550 pages in length, and we believe that it does justice to the breadth of Omry’s erudition. A reception during the 2015 ASEEES conference in Philadelphia celebrated the book's appearance. In addition to this volume, Omry’s legacy will be honored by a special forum in SEEJ (vol. 59, no. 2, 2015), with essays from the memorial conference by Sara Feldman, Olga Hasty, Timothy D. Sergay, and Michael Wachtel. The other conference essays, supplemented by several new pieces, will be published in Uppsala University's Acta Upsaliensis (Eastern Europe series), edited by Herbert Eagle, Karen Evans-Romaine, and Julie Hansen.