LACS Event. Archaeological Fieldwork in Mexico and Peru, 1961-2003: A Conversation with Jeffrey Parsons 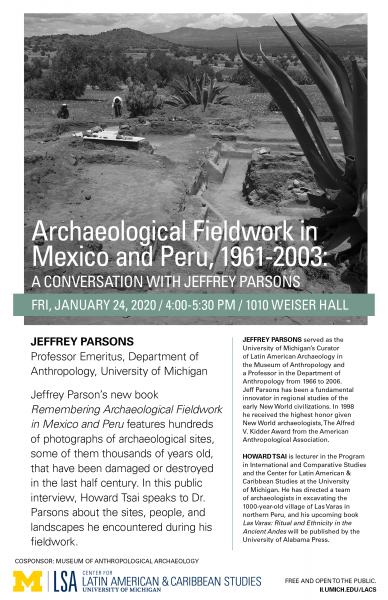 Half a century ago, when archaeologist Jeffrey R. Parsons began fieldwork in Mexico and Peru, he could not know that many of the sites he studied were on the brink of destruction. The rural landscapes through which he traveled were, in many cases, destined to be plowed under and paved over. In his new book Remembering Archaeological Fieldwork in Mexico and Peru, 1961–2003, hundreds of photographs taken by Parsons give readers a chance to see archaeological sites that were hundreds or thousands of years old and have since vanished or been irrevocably altered. In this public interview, Howard Tsai will speak to Dr. Parsons about the sites, the people, and the landscapes he had encountered during four decades of research in Latin America.

Jeffrey Parsons served as the University of Michigan’s Curator of Latin American Archaeology in the Museum of Anthropology and a Professor in the Department of Anthropology from 1966 until his retirement from the University in 2006. Parsons served as Director of the Museum of Anthropology from 1983 to 1986. Jeff Parsons has been a fundamental innovator in regional studies of the early New World civilizations. He began his research career in the Valley of Mexico in 1963, perfecting the technique of archaeological surface survey now used in many areas of the world. Working closely with Mexican colleagues, his teams walked over almost every square kilometer of the Valley of Mexico that was not sealed by asphalt and concrete. The results were detailed reports on the settlement sites of every period from 1200 BC to AD 1520—more than 2500 hamlet, village and town sites. These published data allowed archaeologists to address broader theoretical issues such as the roles of population growth, irrigation, and conflict. In 1975 Parsons introduced the regional archaeological approach to Peru, undertaking a major survey in the Junin area of the central Andes, which has recently been published as a major monograph. In 1998 he received the highest honor given New World archaeologists, The Alfred V. Kidder Award from the American Anthropological Association.

Howard Tsai is lecturer in the Program in International and Comparative Studies and the Center for Latin American & Caribbean Studies at the University of Michigan. Dr. Tsai received his Ph.D. in anthropology from the University of Michigan, specializing in Peruvian archaeology. He has directed a team of archaeologists in excavating the 1000-year-old village of Las Varas in northern Peru. His works on labor organization, pottery style, and ethnic interaction have been published in academic journals and edited volumes. His upcoming book Las Varas: Ritual and Ethnicity in the Ancient Andes will be published by the University of Alabama Press.
Anthropology
101 West Hall
1085 S. University Ave.
Ann Arbor, Michigan 48109-1107
michigan-anthro@umich.edu
734.764.7274
734.763.6077
Sitemap
Facebook Twitter Youtube