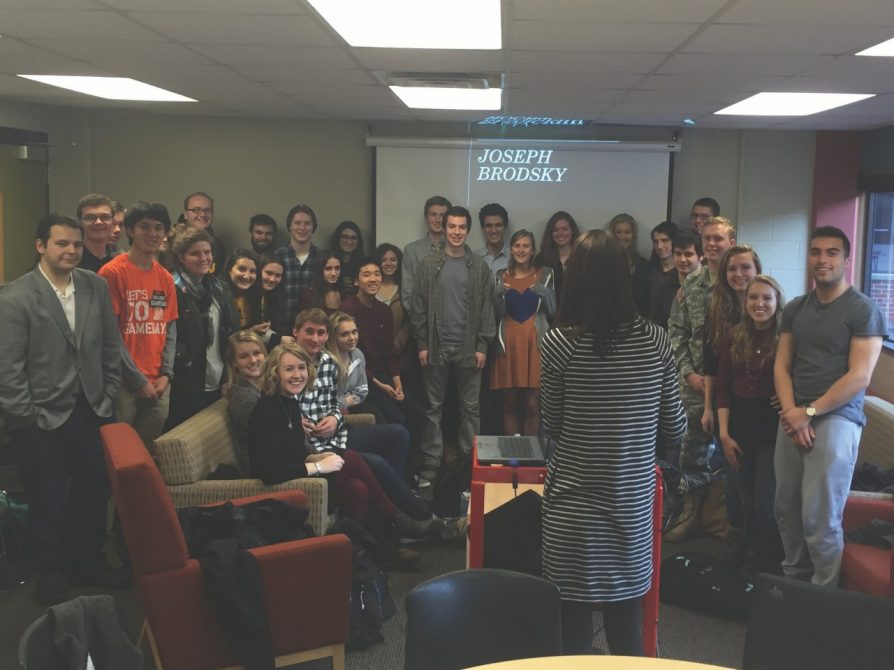 During the 2015–16 academic year, our Department hosted a number of stimulating talks by invited lecturers and also co-sponsored a few exciting events.

In October, Dr. Polina Barskova, a professor of Russian at Hampshire College and a well-known Russian poet, had an engaging conversation with Professor Benjamin Paloff about the ways in which archival academic research interacts with their poetic creativity. Responding to Belarusian writer Svetlana Alexievich’s Nobel Prize, our faculty organized two panels for students where they read and discussed her works in Russian and English. Members of our faculty actively participated in the symposium co-sponsored by our department, “Resistance in Red: Soviet Jewish Combatants in World War II.” A highlight of the symposium was a screening of the 1965 film Eastern Corridor, which was banned by Soviet censorship and was seen for the first time outside the former Soviet Union here at U-M.

In December, Dr. Michal Frankl, the deputy director of the Prague Jewish Museum, and Northwestern University Professor Benjamin Frommer discussed the reactions of the Czechoslovak government to the refugee crisis caused by the expulsion of Jews from Nazi-occupied Austria in the summer of 1938.

In February, Ilya Kukulin, an associate professor at the Higher School of Economics and a well-known Russian poet and critic, presented two events. Our students and faculty had an opportunity to discuss the impact of the internet on contemporary Russian poetry with him in a relaxed setting, and to hear a thought-provoking public talk about the transformation of avant-garde stylistic devices from Sergei Eisenstein to Alexandr Solzhenitsyn.

In March, Dr. Maria Maiofis, an associate professor at the Russian Presidential Academy of National Economy and Public Administration, discussed the impact of the “Thaw,” the post-Stalin liberalization of the late 1950’s, on the development of Soviet children’s literature.

In April, University of Maryland Professor Mikhail Dolbilov gave a lecture exploring the historical contexts of Leo Tolstoy’s novel Anna Karenina. As part of the final project in fourth-year Russian, students presented a play in Russian entitled Office Romance, adapted from the play Coworkers, written by Emil Braginskiy and Eldar Ryazanov, to a delighted audience of faculty and students.

We look forward to exciting guest speakers and events in 2016–17!