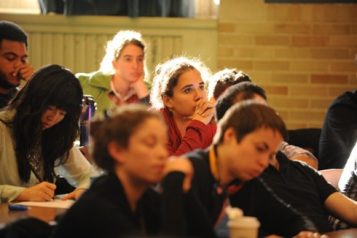 Offered one ½ term each semester. Typically attended in the 2nd year.  Credits: (1). All Graduate Students in Physics must attend this course (or equivalent training)

Informal discussion of ethics in research. Some issues: sharing of research credit, falsification of data, duties to report, financial management.

Two semesters: fall and winter. Both terms are mandatory for all Graduate Students in Physics. Credits: (1 for each term)

Foundational courses on the traditional core subjects of physics. All of these courses satisfy 3 credits per term.

Physics 505/506: Electricity and Magnetism I and II

Physics 511/512: Quantum Theory and Atomic Structure I and II.

Introduction to the methods of relativistic quantum field theory with applications relevant to high energy physics. Topics include: Feynman diagrams, calculations of cross sections for simple processes in scalar and spin or field theories, and the electron gas problem.

Specialty courses each provide comprehensive graduate-level introductions to one of the main areas of physics research.

All of these courses satisfy 3 credits per term.

1st term: basic phenomena and fundamental concepts of condensed matter physics. Classical and quantum descriptions of the electron gas and its transport properties using the Drude theory and the Sommerfeld theory, crystal structures and their symmetries, phonon excitations, electronic band structures and the corresponding classification of materials into conductors, insulators and semi-conductors, phenomena and theories of conventional superconductors, magnetization.

2nd term: an advanced course in condensed matter physics that focuses on correlation effects (beyond the free system). Green’s functions and Feynman diagrams are developed in the context of weakly-correlated electronic systems and the Fermi liquid theory of Landau, transport and localization, phase transitions, spontaneous symmetry breaking, and the optical properties of solids. We then proceed to discuss strongly-correlated electronic systems and non-Fermi liquids such as the quantum Hall effect and topological insulator.

2nd term: further development of particle physics in the detail appropriate for students planning to carry out research in this area. QCD, phenomenology of supersymmetric theories, grand unification and precision tests of the electroweak theory.

Offered each fall and winter, respectively

This course focuses on the cosmology of the early universe, from the big bang to the epoch of the cosmic microwave background.

Physics of the expanding universe, Einstein and Boltzmann equations, inflation, big bang nucleosynthesis, cosmological perturbations, recombination and early universe probes of inhomogeneities up to the CMB epoch. If time allows, some topics in early universe particle physics such as baryogenesis and dark matter genesis will also be covered.

This course focuses on the cosmology of the late universe, from the cosmic microwave background until today.

Review of the expanding universe. Observational aspects of the cosmic microwave background and formation of large scale structure from the CMB epoch until today. Late universe probes of dark energy and dark matter. Broad overview of astrophysics, stars and galaxies and their connection to late universe probes of dark matter, dark energy and structure formation.

This course is a thorough introduction to the theory of general relativity, covering both its mathematical underpinnings and its implications for gravitational physics. Topics include: tensor analysis, curved manifolds and differential geometry, the Einstein field equations, gravitational radiation, black holes, experimental tests of general relativity and standard cosmological models.

The graduate version of this course is a “meet-together” with an undergraduate course and as such there are no prerequisites. The instructor introduces additional challenges for graduate students.

Intended to give students a solid background in the interaction of optical radiation with atoms.  The course begins with a detailed study of the interaction of “two-level” atoms with classical radiation fields. A density matrix formalism is developed that allows one to explore a wide range of problems including absorption, atom optics, laser cooling, saturation spectroscopy, dark states and slow light, coherent optical transients, and atom interferometry. The next part of the course is devoted to properties of the quantized radiation field, including coherent states, squeezed states, photon statistics, and field correlation functions. Finally, a range of problems involving the interaction of the quantized radiation field with atoms is studied, including spontaneous emission, dressed states of the atoms and the field, light scattering, and the Heisenberg approach to matterfield interactions. Additional topics may be covered as time permits. The prerequisites for this course are Quantum Mechanics (Phys 512) and Electromagnetism (Phys 506), or their equivalent. It is assumed that students have a good working knowledge of non-relativistic quantum mechanics using both wave function and Dirac notation.

The offerings of 600-level courses change on a term-by-term basis. Refer to the Schedule of Classes to see what courses are offered in a given term.

All of these courses satisfy 3 credits.

This course can be repeated up to three times.

An advanced course in condensed matter physics that introduces subjects not covered in Physics 520 and 540. 2nd term: an advanced course in condensed matter physics that focuses on correlation effects (beyond the free system). Green’s functions and Feynman diagrams are developed in the context of weakly-correlated electronic systems and the Fermi liquid theory of Landau. We then proceed to discuss the rich phenomena in condensed matter systems, including transport and localization, phase transitions, spontaneous symmetry breaking, the quantum Hall effect and topological insulators, optical properties of solids, strongly-correlated electronic systems and non-Fermi liquids.

This course continues the study of quantum field theory initiated in PHY 513 and PHY523 by developing one or more advanced topics. The focus will generally be different in each version of the course. Some past topics have been “the Renormalization Group”, “Supersymmetry”, or “Non-perturbative methods”.

This course can be repeated up to three times.

The course is focused on the following topics: Atom-field and atom-laser interactions. Absorption, emission, and saturation. Mechanical effects of light on atoms (atom cooling and trapping methods, BEC). Atom interferometry. Rydberg-atom physics and quantum defect theory. AC Stark shifts and ponderomotive effects. Floquet theory. Quantum optics phenomena (such as electromagnetically induced transparency and Autler-Townes effect). The prerequisites for this course are Quantum Mechanics (Phys 511/512) and Electromagnetism (Phys 505/506), or their equivalent. It is assumed that students have a good working knowledge of non-relativistic quantum mechanics.

An introduction to the quantum theory of relativistic strings and its modern applications. Focus is on perturbative techniques based on conformal field theory in two dimensions. Important examples are D-branes, toroidal compactification and orbifolds. The course provides the foundation needed for applications of string theory to strongly gravitating systems such as black holes and cosmology as well as to particle physics.

An introduction to biological physics at the cellular and supra-cellular scales, with an emphasis on understanding how robust biological function emerges from the interactions of systems of molecules, genes, and cells. Topics will be drawn from research literature of the past 20 years including signal transduction and cellular information processing, the effects of noise in living cells, the active mechanics of the cytoskeleton, and pattern formation and morphogenesis in animal development. We will pay particular attention to the process of model-building and the role that quantitative, physical models can play in shaping our understanding of biological systems. Physical and mathematical background developed as needed.

Independent Study with student’s research advisor. Can be repeated for credit.

Independent Study with student’s research advisor. Can be repeated for credit.